As blood flows through capillaries within tissues, some of the plasma leaks out through gaps between the cells in the wall of the capillary, and seeps into the spaces between the cells of the tissues. This leaked plasma is known as tissue fluid.

Tissue fluid is almost identical in composition to blood plasma. However, it contains far fewer plasma proteins as most are simply too big to pass through the tiny holes in the capillary endothelium. Red blood cells are also too big so tissue fluid does not contain these, but some white blood cells can squeeze through and move freely between the tissue cells.

The tissue fluid leaves the capillaries under high pressure at the arterial end of capillary beds. In order to demonstrate this I use the following: 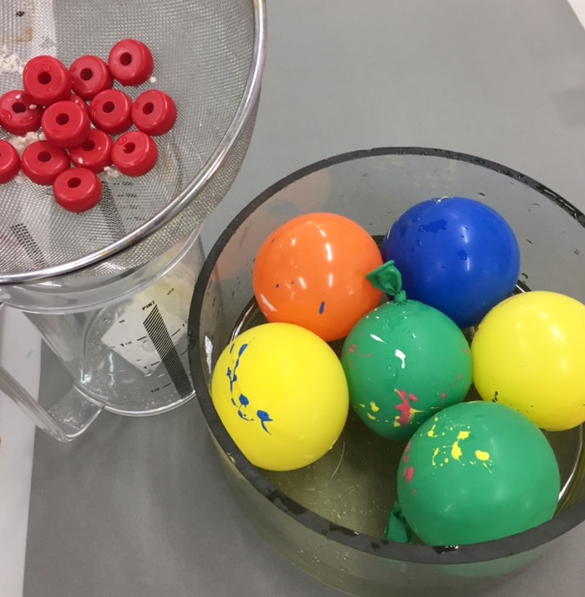 Use the permanent marker pen to draw nuclei on the balloons and then place them into the glass bowl. The balloons represent the tissue cells. Fill the glass jug with water and add a drop or two of yellow food colouring (blood plasma). Throw in some red beads (red blood cells) and rice (plasma proteins) – grind up the rice in the pestle and mortar beforehand so that you have different sized fragments.

Pour the ‘blood’ through the sieve, highlighting that the holes in the sieve represent the tiny gaps in the capillary wall. I like to pour it from a great height so that it sprays everywhere (showing that the blood is under high pressure) and covers the cells below. Highlight that none of the red blood cells have passed through the holes and nor have most of the plasma proteins (the students should see some of the smaller bits of rice floating about in the tissue fluid but most will remain trapped in the sieve).